Welcome to take part of the dissertation at Chalmers.

The diffusion of large molecules in wood pre-treated with steam explosion is important to understand in the context of the materials biorefinery. Steam explosion is a pretreatment method used to both open up the internal structure of wood and increase the accessibility of the cell walls of the wood with the use of high-pressure steam, and it is considered an energy-efficient method.

In this thesis, the diffusion of large molecules in wood pretreated with steam explosion is studied experimentally and through mathematical modeling. During steam explosion, wood biomass is subjected to saturated steam at elevated pressure and is followed by a quick release to atmospheric pressure. This treatment leads to mechanical ruptures and chemical modifications of the wood structure. Fluorescently marked dextran probes, up to 40 kDa in size, were used in combination with Fluorescent Recovery after Photobleaching to study diffusion in samples prepared with steam explosion. In this method, the fluorophore is bleached with a high intensity laser, the recovery of fluorescent intensity by the surrounding molecules is measured, and an effective diffusion coefficient can be calculated. Mathematical modeling was performed within the Lattice Boltzmann framework, utilizing images from a scanning electron microscope and high-resolution X-ray tomography, to reconstruct an accurate representation of the structural features of the microscale in wood.

The main findings of this thesis show that fluorescent diffusion probes can be utilized to investigate diffusion in both native wood and steam-exploded pretreated wood. A relative difference between earlywood and latewood is shown, and an increase in diffusion caused by the disintegration of the cell wall structure is found. The sub-micron features of the bordered pits, which enable radial transport between wood cells, were reconstructed, as well as the general microstructure in wood. The effective diffusion coefficient was computed by solving the diffusion equation for each structure. It was found that the outer borders covering the internal structure of the bordered pit totally dominate the mass transfer resistance. Transversal diffusion rates in the microstructure were found to increase after steam explosion, depending on the degree of disintegration and local volume investigated. The steam-exploded samples generally had a lower tortuosity, or shorter diffusion pathway, than native samples. Multiscale modeling was used to overcome the high computational demand of resolving the small features of a bordered pit at the microscale. The models presented used a variable diffusion coefficient where in the result for a single bordered pit is used. 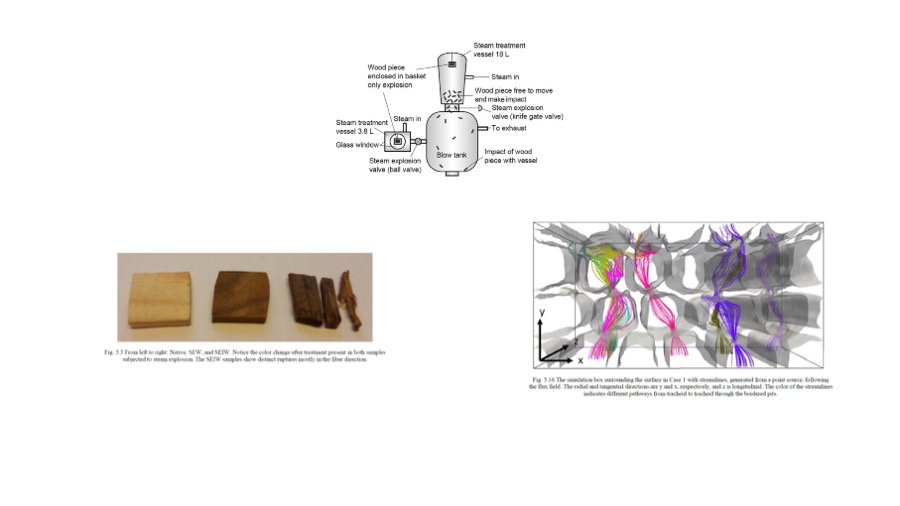